Eclipse Hideout is a location in Bravil. You will have a choice between Sneak, which means that you will lose if any of your creatures are destroyed, and Parley, which features an Eclipse lane: “When a creature is summoned here, trigger its Last Gasp ability”. In master difficulty, the opponent will begin with Skooma Frenzy in play if you choose to Parley. 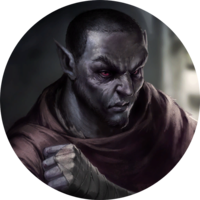 Kellen: “The Agent faced a choice: Should they sneak in and assassinate the leader, or walk in and attempt to parley?”

If the player chooses “Sneak”

Game Hint: “Move carefully. If any of your creatures are found and destroyed, you’ll lose.”

Kellen: “The agent had killed the Eclipse’s leader, fulfilling half of Andronica’s contract. Now to meet with the Claws.”

If the player chooses “Parley”

The Eclipse: “You want to talk to the boss? You’ll need to go through us!”

Eclipse Baroness: “What is going on out here? Let us talk like civilized people.”
Eclipse Baroness: “The Claws have your compatriot? Then we have a common enemy. I will send some of my men to help you assassinate the rogue.”