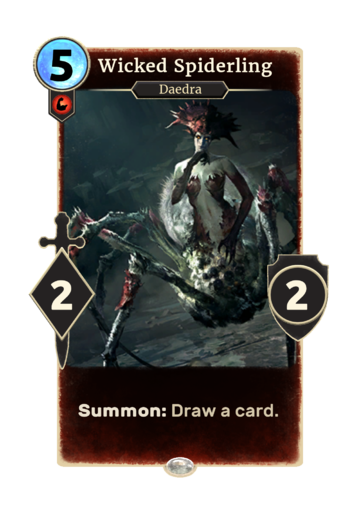 On the upper left-hand corner of each card is a number in a blue circle. This is the cost, in magicka, to play this card.

On the left-hand side of creature cards is a number inside a diamond, with a sword behind it. This is how much damage the creature will do to other creatures or other players. If the Power is raised or lowered by other card effects, the new value will be shown in green or red to indicate the change.

When battling another creature:

On the right-hand side of creature cards is a number inside a circle, with a shield behind it. This is how much health the creature has. If the Health is raised or lowered by other card effects, the new value will be shown in green or red to indicate the change. If a creature is Wounded, the lowered Health value is also displayed in red.

If a creature’s Health is reduced to or below 0, it is killed.

Most cards represent one of the five Attributes: Agility

For more information about deckbuilding, see the Decks page.

Each card has a rarity, depicted by the gem on the bottom of the card, that represents how easily the card can be obtained. The four rarities from most common to rarest are: Common

and Legendary . Legendary cards have a special border around them as well. Certain Legendary cards are also Unique, depicted by a red gem on the top of the card, and only one can be put into a deck.

The rarities do not affect gameplay, with the exception of the Pauper Gauntlet where only Commons can be used for deckbuilding.

Every card has a name, displayed in large letters in a box at the top of the card.

Below the card’s name, in smaller letters, is the card type. There are four card types: Actions, Creatures, Items, and Supports. For creatures, the Type displayed will be the race/species (for example: Daedra).

This is the box below the card’s art that describes what the card does. There are some Creature cards where this section is blank; this means that they don’t have any special abilities, just their Power and Health.

Words in bold are Keywords and Card Effects. Keywords have the same effect on all cards with that keyword, and that effect is constantly active unless the card is Silenced. Other effects are only activated under specific conditions, and the effects vary by card, and those are described on the individual cards. So, for example, when the Wicked Spiderling is first Summoned (that is, played in a lane), the person who played it gets to draw a card.

There are some card effects that are specific to Card Types: Items have the Equip keyword, as they have specific effects when they are equipped to a creature, while Supports have the Activate keyword, as the effect is only used when activated by the player. For a list of other card effects, see Card Effects.

Some cards, specifically Supports and Shouts, have a golden bar on top of the text box. For Supports, this is the number of times you can use that card’s effect, or Ongoing for Supports with a constant effect. For Shouts, this is what level (1-3) it is.

Previously, there was a green arrow inside a circle in the upper right-hand corner of some cards. This meant that the card could be trained into a new version. The training occurred at certain levels which can be found on the Training page. Training was discontinued following the transition from Dire Wolf Digital to Sparkypants Studios.